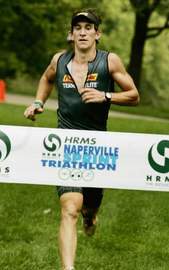 Soon after Jason Smith finished second in the HRMS Naperville Sprint Triathlon Sunday, he predicted his girlfriend, Adrienne Hengels, would come in second among the women.

And he was right.

Neither was upset about the second-place status. Smith gave credit to the winner Colin Riley, 22, of Aurora, who he ran even with much of the race. Riley finished in 56 minutes and 44 seconds.

With a cowbell in one hand and camera in the other, Robert Lee of Naperville…